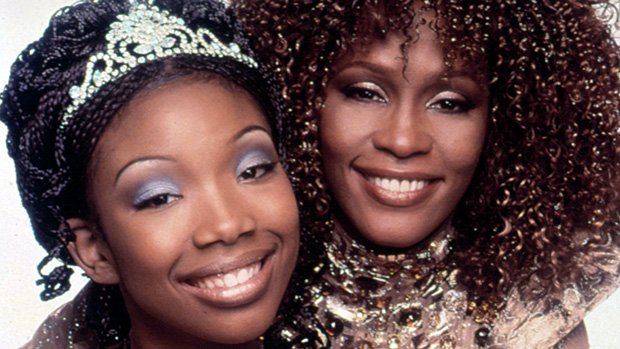 The first episode of Brandy’s new Audible Words + Music project, Brandy — A New Moon, is taking a deep dive into the Grammy winner’s game-changing role in Rodgers & Hammerstein’s Cinderella. In our EXCLUSIVE preview of the project, which premieres December 2, Brandy admits she “didn’t realize” that she was “making history” playing Cinderella.

“I wasn’t at all thinking about what it meant to be the first Black Disney princess, nor was I thinking about what it would mean for the world to see a Black Cinderella with braids,” she says. “For me, it was, I’m working with Whitney Houston. Just a few years earlier, I was crying because I couldn’t meet her and now she’s hand-picked me to be Cinderella. I’m going to be in the studio with Whitney, and she’s going to play my Fairy Godmother. Wow. It was the wildest of dreams come true.”

Brandy reveals that what “felt revolutionary” to her was “Disney taking a shot at doing something monumental by having this large, multicultural cast that was brilliant, that was smart, and, frankly, ahead of its time.” The TV film premiered in 1997 on ABC. Whitney co-produced the racially diverse film that also featured Whoopi Goldberg, Paolo Montalban, Jason Alexander, Bernadette Peters, and more.

While recording the movie’s incredible music, Brandy got the chance to be in the studio with Whitney. “To hear her sing and sing with her was beyond anything I had experienced,” Brandy admits.

She continues, “When I look back now, it’s like, oh my god, I was the first Black Cinderella, and it was because of Whitney that I got a chance to play such an iconic role. It was because of her that I became the first Black Disney princess. I couldn’t really appreciate it in that moment because I was focused on doing the best possible job I could. But my life had quite literally become a Cinderella story. My dreams had come true, except I didn’t care about finding a prince because I had met my Fairy Godmother.”

The role of Cinderella is coming full circle for Brandy. She will be playing Cinderella again in the upcoming Descendants spinoff movie The Pocketwatch.

In Brandy’s Words + Music project, she holds nothing back as she traces the personal experiences, triumphs, and traumas that shaped her as a global, generational superstar. Written and conceived by Brandy with Gerrick Kennedy, Brandy’s Words + Music is an intimate and bracingly raw meditation on power and purpose from one of the most influential singers of all time.