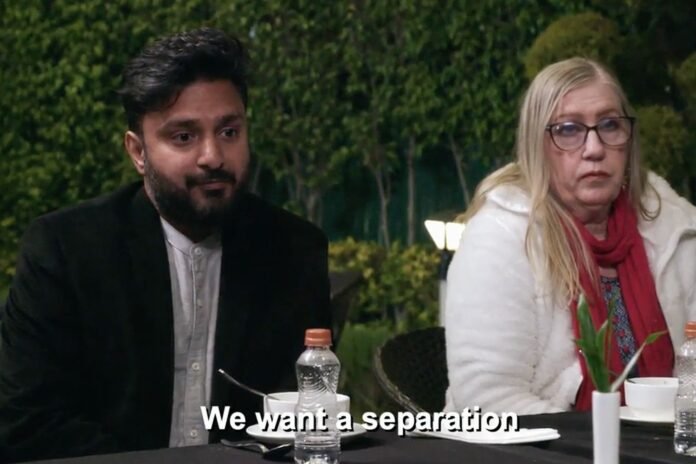 Sumit Singh’s family is beyond ready for him to end things with Jenny Slatten.

In a teaser for the next episode of 90 Day Fiancé: Happily Ever After?, Sumit’s father tells the couple: “I am speaking the truth, whether it is bitter or it is sweet. We want a separation from Jenny.”

Later, he says in an interview: “This relationship is not going to last. It will be finished within one or two years.”

His harsh remarks come after Jenny, 63, revealed her plan to move back to America with Sumit, 33, after his family refused to accept her during their decade-long year relationship. She dropped the shocking news during a family dinner that Sumit’s father reluctantly joined (along with Jenny’s daughter) while his mother refused to attend.

“I’m never gonna be accepted,” Jenny said. “I don’t want to take him away from his family, but I think maybe it’s better if we just go ahead and live in America then.”

She thought perhaps the solution would help both side because “we won’t be upsetting the family so much. We won’t be seen together I guess.”

RELATED VIDEO: 90 Day: Immigration Lawyer Wonders If Jenny Is a ‘Spinster’ Given Her 30-Year Age Difference with Sumit

Sumit was obviously blindsided by the proposition after dodging the America conversation multiple times and even telling Jenny he wasn’t willing to move across the world because he still hoped to reconcile with his family.

Sumit married Jenny last year after nearly 10 years together. However, they did so without telling his parents, who ultimately did not take the news well. Jenny told Sumit in an episode that aired in September that he needed to choose between “his parents and our happiness.”

In a confessional, Sumit said at the time he thought it was hard for Jenny to “understand all the obligation and dynamics between Indian families.” He also said it’s “difficult to make a happy life” without the love and support of one’s family.”

“I understand how hard it must be to be abandoned by your own parents, but Sumit needs to decide between his parents and our happiness,” Jenny then said in her own interview. “I’m the one that’s in this country by myself. He’s all I have. He needs to remember that. We are now husband and wife, and he needs to behave like my husband.”

90 Day Fiancé: Happily Ever After? airs Sundays at 8 p.m. ET on TLC and discovery+.