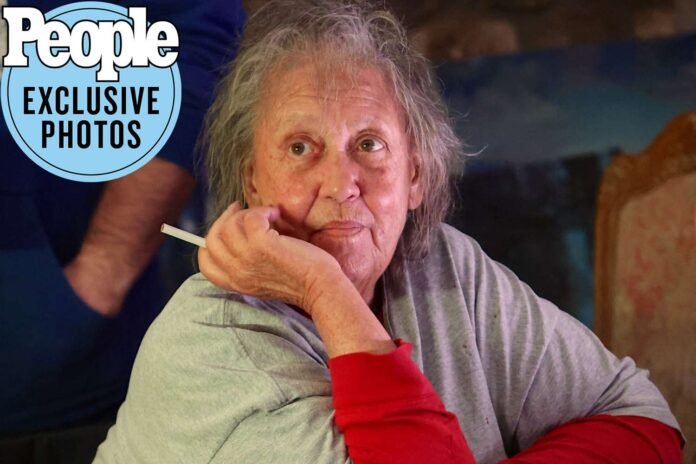 Shelley Duvall is hard at work on her new movie.

In new photos shared exclusively with PEOPLE, the actress, 73, smiles with her script and scene partner Felissa Rose on the set of the upcoming horror film The Forest Hills.

Director/producer Scott Goldberg tells PEOPLE, “The best part of working with Shelley is that she fills the room up with her kindness and love. She is kind, and you can see that even after all these years since her retirement from acting she is still a true professional.”

Duvall — in her first film after 20 years away from Hollywood — plays the role of Mama in the werewolf movie, mother to Rico (Chiko Mendez) and Emily (Linda Flores). Forest Hills‘ cast also includes E.T. and The Howling alum Dee Wallace plus Terminator 2: Judgment Day‘s Edward Furlong.

Rose, who plays Dr. Gonzalez in the movie, says working with The Shining actress “exceeded all my expectations.”

“Shelley has been an idol of mine and exceeded all my expectations, as a person and as an actress. She lights up the room with her beautiful eyes and amazing soul and I felt so connected to her,” says the actress, known for 1983’s Sleepaway Camp. “She’s a true legend.”

Cinematographer/producer Scott B. Hansen adds, “Working with Felissa Rose and Shelley Duvall was an amazing experience and you could see the chemistry on set.”

Duvall’s last film role was in 2002’s Manna From Heaven, after which she announced her retirement from acting. She recently told PEOPLE that her character in Forest Hills has a “quiet rage, which sometimes turns explosive.”

She also praised the “fantastic” two-man crew as “real professionals,” revealing that the film marks the “first time I ever worked with a director who was on FaceTime.” Duvall said, “It was fun, very satisfying,” joking of the remote filming experience, “Welcome to the future.”