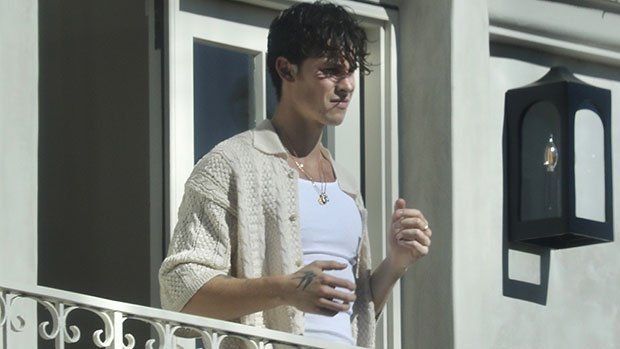 Shawn Mendes may or may not have a new woman, but we know for sure that he enjoys a breezy look. The chronically shirtless singer, 24, was recently seen stepping out on a balcony looking every inch the pop star in a white tank top, cream colored, unbuttoned collared shirt, and jeans. Shawn squinted in the sunshine, and rocked a couple of gold necklaces and rings. His carefree, mussed curls completed the casually perfected look. The pics come just weeks after fans began speculating that he’s dating brunette beauty Dr. Jocelyne Miranda. The “Seniorita” singer was seen stepping out for lunch with the chiropractor, who has reportedly worked with many celebrities, back in July, per The Daily Mail. By November, those rumors had intensified when the duo, who seem very friendly, were seen shopping together.

Shawn famously split from ex Camila Cabello, 25, in November of 2021 after two years of dating. “Hey guys, we’ve decided to end our romantic relationship but our love for one another as humans is stronger than ever,” a joint statement on Nov 17, 2021, posted to the stars’ Instagram accounts read. “We started our relationship as best friends and will continue to be best friends. We so appreciate your support from the beginning and moving forward.”

Several months later, in March of 2022, Shawn opened up about what it was like to be apart from the gorgeous “Bad Things” songstress. “Like, who do I call when I’m like, in a panic attack?” he said in a raw Instagram video as he played chords on a piano. “Who do I call when I’m like, f—ing, on the edge? I think that’s the reality that kind of hit me – it’s like, ‘Oh, I’m on my own now.’ Now I feel like finally, like, I’m actually on my own, and I hate that. That’s my reality, you know?” Back in July, Shawn famously cancelled the rest of his 2022 tour amid mental health concerns.

For her part, Camila had no bad feelings about the split. “I feel like there is literally nothing but love for him,” she told Apple Music in part, back in March. She’s reportedly now dating Lox Club CEO Austin Kevitch.

Jocelyne Miranda: 5 Things to Know About The Doctor Spotted Out With Shawn Mendes