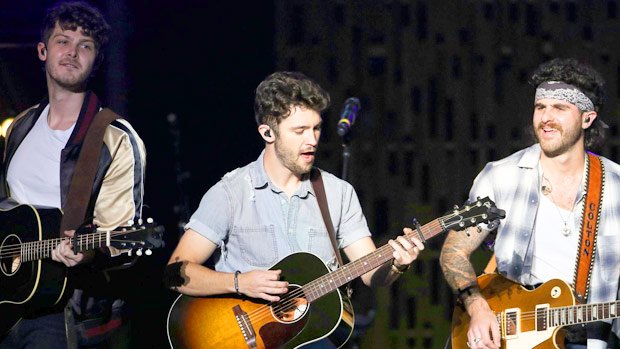 New year, new music! Restless Road is ready to deliver their fans some fresh tunes next year and spoke to HollywoodLife.com in an EXCLUSIVE interview about what we can expect from the band in 2023! “I think that the goal in the next year, at some point in time, is to put out the album,” Colton Pack of Restless Road told HL. “We already know what we’re going to call it, and we’re already got about seven songs in the bank. So, I think we’re planning on going back in and cutting at the top of the year!”

The trio explained that they’ve been “trying to find new music that feels really unique [to them] as a group.” “We’re just trying to figure out what kind of songs really highlight what we do, so they make us stand out from the rest of the crowd,” Garrett Nichols explained. “We’re starting to get a lot of really cool stuff piled up that’s really going to highlight our harmonies, so I’m excited. A lot of secretive stuff happening!”

“I think the goal is just to have a really well rounded album,” Garrett added. “Something that I remember Kane said about his goal with his albums, and honestly, I think that this should be everybody’s goal, is that whether you’re a country fan or not, there should be a song on every album that at least somebody can gravitate towards and that somebody can get something out of. And I think that that’s our whole goal here.”

Restless Road has had a full year of touring, joining Kane Brown on several dates for his Drunk or Dreaming Tour, and embarking on their own Bar Friends tour. “By the end of the year, we’ll have been on the road for, gosh, 250 days this year,” Colton recalled. “We’re going to continue that, but I think our main focus, and the thing that excites us the most right now is just getting new music out to people, because that’s what drives the whole thing.”

He continued, “That’s what drives the whole boat is music and getting the music out to fans and building that buzz and momentum to keep going forward.” RR finishes out 2022 in Europe with Kane Brown before settling in for the holidays and then hitting the studio in 2023! Following Restless Road on social media to stay up to date with their new releases and upcoming tour dates!