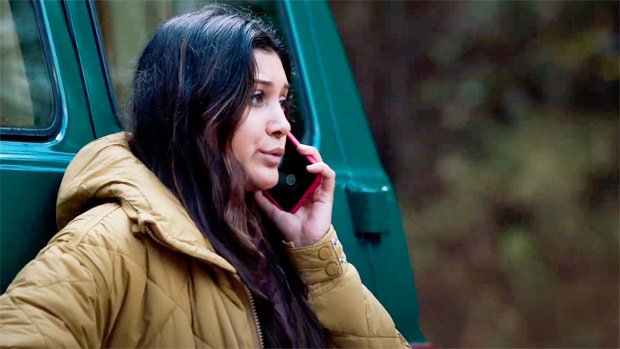 Padma has pulled off onto the side of the road to call AJ and the boys in this EXCLUSIVE preview of the December 6 episode of The Resident. AJ tells Padma that her “text was vague” and asks where she is. Padma says that her van broke down in Savannah, and she couldn’t get it into a shop until this morning.

Padma promises that she’ll be “back as soon” as she can. AJ doesn’t think anything about Padma’s behavior is strange. Before getting off the call, AJ wants to put Padma on speakerphone so the boys can hear her.

“Actually, AJ, I can’t,” Padma quickly says. “The mechanic just got here, so I have to go.” Again, AJ doesn’t think there’s any cause for alarm. He tells Padma to just text when she’s back on the road.

But Padma’s not telling the full truth. There is no mechanic. Her car still works. Padma hops back in her car and begins driving away from Atlanta, AJ, and her babies.

HollywoodLife previously spoke EXCLUSIVELY with EP Amy Holden Jones about Padma’s postpartum journey in season 6. “The shock and the stress of what she goes through will factor in throughout the season and the upcoming episodes. Here’s a happy-go-lucky character who suddenly has to face the kind of problems a fully adult mom faces,” Amy said.

“We wanted to do a postpartum story where a character had challenges, including depression,” Amy continued. “It’s all the more heart-rending when that happens to a free spirit like Padma, and the effect this has on Leela and Raptor makes for a significant story that we deal with in the season.”

The synopsis for the December 6 episode reads: “Conrad comes face to face with Nic’s dad, Kyle, after 5 years of no contact when he comes into Chastain with an extremely low heart rate. Billie advises her patient against surgery, but the patient’s family ignores her recommendation. Meanwhile, Cade musters up the courage to confront Ian about his addiction and Leela grows concerned about Padma.” The Resident season 6 will return in 2023 with brand-new episodes.