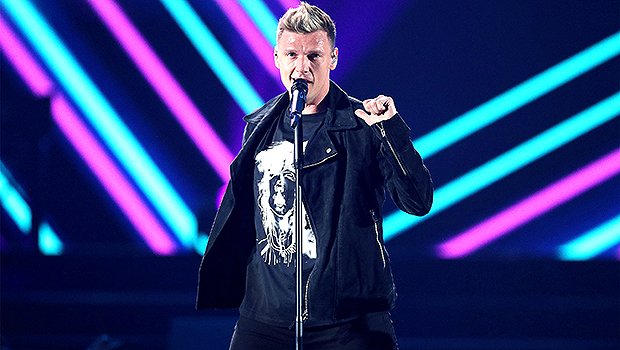 Nick Carter is getting by with the support of his bandmates. The Backstreet Boys musician opened up for the first time about what it was like performing at London’s O2 Arena just one day after his younger brother, Aaron Carter, suddenly died at the age of 34 and how his bandmates supported him through the heart-wrenching time. “It was very emotional for me, having my guys with me. That night, it was tough to get up on stage,” the 42-year-old popstar recalled to Extra! Dec. 2 of the Sunday, Nov. 6 concert.

“There’s the old saying, ‘The show must go on.’ That’s been with us for years, but that night, I didn’t know what to expect, I didn’t know what was going to come from it, getting on that stage,” he continued. “Getting the reaction from the fans, it was definitely comforting, and it meant a lot to me.”

Nick broke down in tears that night as singer Kevin Richardson honored Aaron. “Tonight we got a little bit of heavy hearts because we lost one of our family members yesterday.” the 51-year-old singer began in his speech. “We just wanted to find a moment in our show to recognize that Nick’s little brother, Aaron Carter, passed away yesterday at 34 years old. He was a part of our family and we thank you guys for all the love and all the well wishes and all the support.”

Most emotional moment of the Backstreet Boys concert so far. They made a speech about Aaron Carter.
Not a dry eye in the o2. pic.twitter.com/YBpTz6neVc

The rest of the Backstreet Boys — A.J. McLean, Brian Littrell, and Howie Dorough — embraced Nick as he got emotional. They dedicated their next song, “Breathe”, to the late singer.

The “Aaron’s Party” hitmaker passed away in his Lancaster, Calif. home in early November. He was found unresponsive in his bathtub by his fiancé Melanie Martin and was pronounced dead on Saturday, Nov. 5 at 11:14 am. Following his death, Nick posted an emotional tribute to him.

“My heart is broken. Even though my brother and I have had a complicated relationship, my love for him has never ever faded,” he wrote in his caption alongside a series of throwback photos over the years with Aaron. “I have always held onto the hope, that he would somehow, someday want to walk a healthy path and eventually find the help that he so desperately needed,” he said, referencing Aaron’s addiction and mental health struggles.

Aaron Carter’s Siblings: Everything To Know About His 7 Brothers & Sisters After His Death

“Sometimes we want to blame someone or something for a loss, but the truth is that addiction and mental illness is the real villain here,” he continued. “I will miss my brother more than anyone will ever know. I love you Chizz. Now you can finally have the peace you could never find here on earth….God,Please take care of my baby brother.”

Fortunately, Nick and Aaron had ended their feud before his death.  “[Aaron] was on the path to making amends with so many people in his life, and he had made amends and made peace with Nick,” his rep told HollywoodLife EXCLUSIVELY. “Aaron was happy about this because he loved his brother,” the rep added. “He looked up to Nick in so many ways. They were trying to make everything good again.”