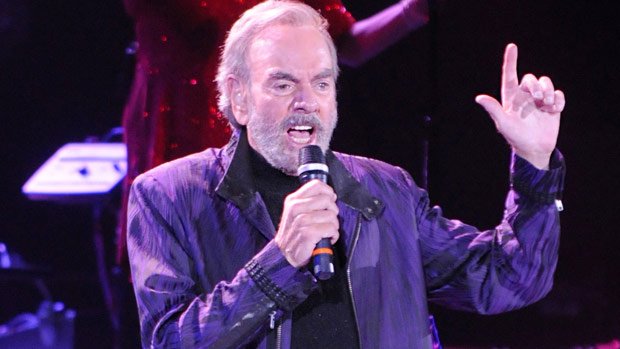 Neil Diamond fanatics were already on cloud nine during the opening night of his Broadway musical A Beautiful Noise on Sunday, Dec. 4. But there were really in for a treat when the crooner, 81, surprised audiences at the Broadhurst theater with a rendition of his anthem “Sweet Caroline.”

I thought the highlight of the night was watching Neil Diamond watching and loving @beautifulnoise and then THIS happened. pic.twitter.com/P5Mpw9qYlE

The audience and the show’s cast screamed as Neil took the mic. His voice was smooth as ever as he sang, and when the crooner got close to the track’s iconic chorus, a lovely choir began harmonizing behind him.

And the soft rock legend dressed the part, rocking a toned-down version of one of his signature sequined jackets. Instead of full glitter, the snazzy look featured a metallic python print over black.

Broadway pro and podcaster Jamie Dumont captured the moment for Neil fans around the world. He took to Twitter with the clip and shared, “I thought the highlight of the night was watching Neil Diamond watching and loving @beautifulnoise and then THIS happened.”

It was a rare outing for the Rock & Roll Hall Of Fame singer, who was at the production with his wife Katie McNeil. Neil has largely stayed out of the spotlight since he stopped touring in January 2018 following his diagnosis of Parkinson’s disease. In fact, it was the last time he performed in New York since 2017.

Fans were heartbroken when he initially announced the news in 2018. In a statement, shared with NPR and other outlets, he said, “It is with great reluctance and disappointment that I announce my retirement from concert touring.

‘The Last Of Us’ TV Series: The Official Trailer, Premiere Date & More You Need To Know

“I have been so honored to bring my shows to the public for the past 50 years. My sincerest apologies to everyone who purchased tickets and were planning to come to the upcoming shows.” He added that he would continue to write music “for a long time to come.” Finishing with a nod to his hit “thanks to you,” he told fans, “This ride has been ‘so good, so good, so good.’”