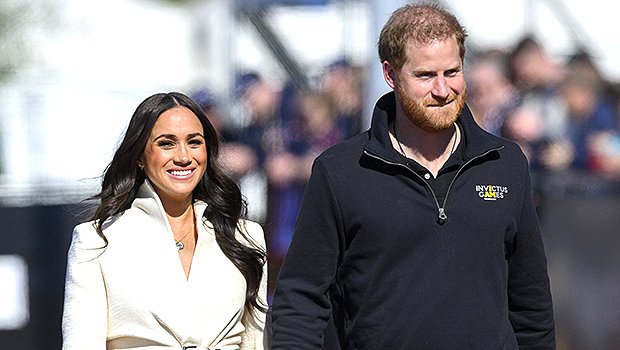 Prince Harry and Meghan Markle had their game faces on while promoting the 2023 Invictus Games in a new ad out Wednesday, Nov. 30. The Duke and Duchess of Sussex hyped up fans with an intense round of ping-pong in the black and white Instagram promo for the competition, which is set to take place in Dusseldorf, Germany in Sep. 2023.

The drama was in full force in the clip, which started with several other proud Invictus Games athletes getting their game on. After some key competitors played, it was time for the royals to play.

Harry played with a few of the athletes in a huge, empty stadium flooded with lights. Then it was time for the main event. Meghan’s diamond-clad hands could be seen tapping her paddle before cameras panned up, she gave a nod and then let Harry serve first.

The Instagram’s caption teased the event, saying, “Are you ready? The incredible experience that is the #InvictusGames is coming ever closer.” Offering ticket info, it continued, “Be a part of it to experience the power of sport in recovery in Dusseldorf Sept. 9-16, 2023. Tickets for the Opening and Closing Ceremonies are now available!”

Prince Harry founded the Invictus Games in 2014, as an athletic competition for wounded, injured, and sick servicemen and women, both serving and veterans. The royal, a veteran of the English Army Air Corps, talked about the impact the competition has had on his with People in Apr. 2022, calling the community a “major part of my growth and learning.”

Creating the Games involved listening to military and veteran families—and hearing directly from them about their lives—and that offered so much perspective,” he added. “It’s been a lesson in serving a purpose greater than ourselves, and the benefit that comes from that extends to both the individual and community. I truly believe we are at our best when we’re in service to others, and Invictus is all about upholding that value.”

Prince Harry’s Memoir ‘Spare’: 1st Photo Of The Cover, Release Date & Everything Else We Know