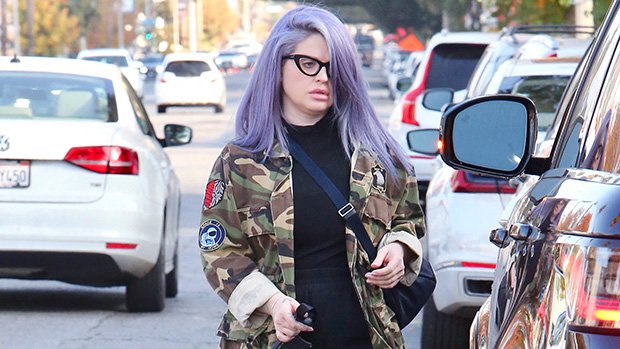 Kelly Osbourne has emerged for the first time since giving birth! The reality star and singer, 38, was casual in a black ensemble and green camo jacket as she went shopping at baby store Juvenile on Tuesday, Nov. 29 in Sherman Oaks, California. Kelly held onto a gray plastic baby tub, seemingly for her newborn son’s bath time, which she then loaded into her black SUV. She sported her light purple hair down and straight, along with a pair of cat eye sunglasses. She also accessorized with a Bandolier phone case.

It was reported that the first-time mom headed to the hospital on Nov. 6 to give birth to her baby with Slipknot turntablist Sid Wilson by Page Six. The outlet also noted that the baby would also be named Sid for his father. In October, Kelly revealed that life is truly amazing” as she prepared to welcome her child while also marking a sobriety anniversary. “If you would have told me 365 days ago that I would be sober, happy, and about to be a mumma I would have laughed in your face,” she wrote via Instagram. “Life is truly amazing when you do the work. Thank you to everyone that has supported me on this journey,” the former star of The Osbournes also said.

Kelly and Sid themselves have yet to confirm their bundle of joy’s arrival, along with a name or first photos — however, she confirmed she was expecting earlier this year in May via social media. “I know that I have been very quiet these past few months so I thought I would share with you all as to why,’ she began at the time, before revealing: ‘I am over the moon to announce that I am going to be a Mumma. To say that I am happy does not quite cut it. I am ecstatic!’” she gushed, showing off sonogram photos. The pregnancy news came just months after taking her latest relationship Instagram official in January.

A source EXCLUSIVELY revealed to HollywoodLife that Kelly’s dad Ozzy, 73, was over the moon about the new addition. “Kelly is thrilled she’s having a boy and is so happy that she’s able to give Ozzy his very first grandson between herself and Jack,” an Osbourne family source spilled to HL. Notably, the Black Sabbath icon has two grandsons from his previous relationships: Elijah Osbourne, from Ozzy and Thelma Riley’s son Louis Osbourne, and Harry Hobbs, the son of Thelma and Ozzy’s daughter Jessica Osbourne — however, Kelly’s son is the very first grandson of both Ozzy and wife Sharon Osbourne. “[Ozzy] can’t wait to meet him, and Kelly thinks it’s so cute because he literally can’t stop talking about it…He tells everyone he meets how excited he is that she’s having a boy,” says the insider. “He couldn’t be more ecstatic, and Kelly loves how happy it’s made Ozzy.”