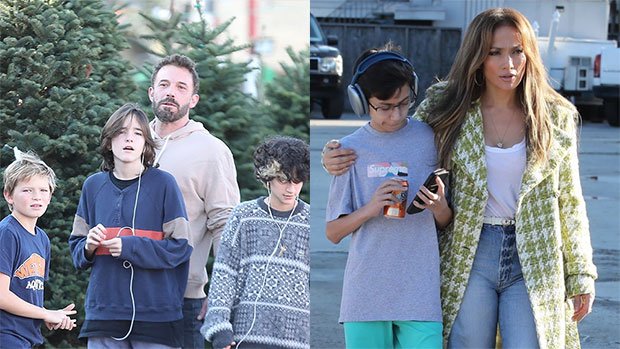 Jennifer Lopez, 53, and Ben Affleck, 50, were seen Christmas tree shopping with her child Emme, 14, their twin brother Max, also 14, along with his daughter Seraphina, 13, and son Samuel, 10! The couple settled on a Balsam tree that the kids appeared to pick, which was seen loaded on top of a white Cadillac SUV in Santa Monica on Saturday, Dec. 3. This Christmas marks their first as a married couple, just four months after tying the knot in Vegas followed by a celebration outside of Savannah, Georgia with their friends in August.

The “Dear Ben” singer looked stylish in a mustard yellow houndstooth coat from Chanel’s 2022/23 Pre-collection that dropped in July. She paired the stylish jacket with a dark pair of wide legged jeans, a white t-shirt and sneakers. She was also seen with her signature sunglasses as they made their way around the sunny property. Ben also sported jeans along with a beige colored draw string hoodie as he smiled behind their three kids, who all opted for laid back looks with sneakers.

Ben’s oldest daughter Violet, 17, didn’t appear to be present with the crew. The teen was most recently spotted in Washington, D.C. alongside mom Jennifer Garner as the mother-daughter duo attended Joe Biden’s first state dinner at the White House for French President Emmanuel Macron and his wife Brigitte. Violet looked so grown up in an ankle length black dress with a heart pattern paired with a chic pair of red patent leather pumps. She kept her brunette locks back in a bun, showing off her youthful complexion and stylish clear glasses.

The Christmas tree outing comes just a week after Jennifer announced a new album dedicated for Ben called This Is Me…Now. The project is a follow-up project to This Is Me…Then, which was originally released in 2002, and includes songs “Dear Ben,” “I’m Glad,” two versions of “The One” and “Baby I Love U!” all inspired by their relationship.

“Twenty years ago I fell in love with the love of my life. I was working on an album and it was called This Is Me…Then,” she said in an interview with Apple Music’s Zane Lowe. “It was all about capturing that moment in time. Now the most amazing, incredible, unbelievable thing has happened. The reason we’re here is because I want to capture this moment in time because it is even better than the first time,” she also teased of the upcoming album, set for release next year.

Jennifer Lopez In ‘The Mother’: First Teaser, The Cast & Everything We Know About Netflix Film