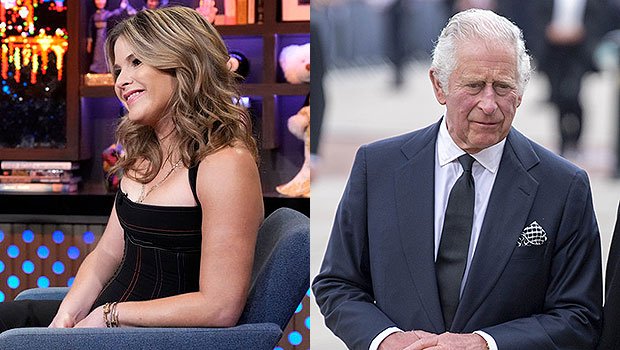 Jenna Bush Hager, 41, just revealed that she did not wear underwear when she met with King Charles III, then Prince Charles, on the night before Queen Elizabeth II died. The Today with Hoda and Jenna host made the candid confession while speaking with Andy Cohen on What What Happens Live during the November 29 episode.

When Andy asked her “Did you wear undies that night?” Jenna shook her head no and replied, “It was a beautiful tight dress. It would’ve shown!” The brunette beauty explained that she was there to interview Queen Consort Camilla and met with the royal family in Scotland for dinner. The reveal came after Jenna’s recent revelation that she never wears underwear.

Earlier this month, Jenna’s cohost Hoda Kotb told their show’s audience that the Emmy Award-winning star “never wears underwear.” Hoda added, “I was a little surprised because Jenna and I know a lot about each other.” She revealed that she got a “little shock” after she became privy to this information when the ladies shared a dressing area before going on air.

The daughter of Laura Bush and George W. Bush also confessed that her parents likely would not have been too happy to find out the whole world knows she doesn’t wear underwear. “I am sure my parents were not thrilled,” she laughed when asked by a WWHL viewer how her parents felt about the news. However, Jenna was quick to note that she’s a “lady” and would never have divulged that information. She clarified that it was all Hoda.

Jenna doubled down on her choice and said, “I think it makes a more pretty silhouette! I also think you don’t have to pack as much. There’s a lot of pros to it!” However, the mom-of-three seemed a touch mortified as she added, “You promised me you wouldn’t do this! There’s a lot of people here!” later joking, “I’m sure my mom has never been more proud.”

Presidential Daughters Of The Last 20 Years: From Chelsea Clinton To Ivanka To Biden’s Two Girls