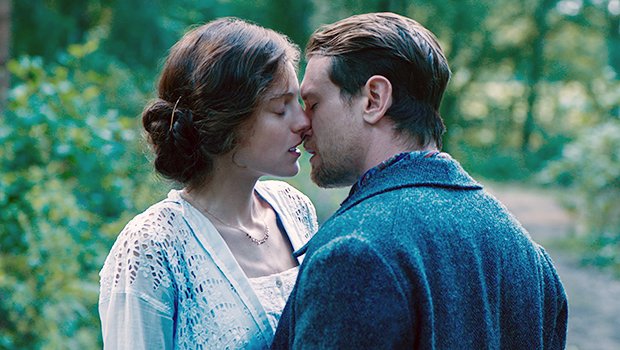 D.H. Lawrence’s once-banned book is getting the Netflix treatment. Lady Chatterley’s Lover premiered December 2 on the streaming service and features Emma Corrin and Jack O’Connell as Connie and Oliver, who find themselves wrapped up in an all-consuming affair. HollywoodLife spoke EXCLUSIVELY with Jack about diving deep into this emotional and physical role. The actor admitted that working with an intimacy coordinator during the movie’s steamy scenes was a “new experience” for him.

“I won’t lie. It was new. It was a new experience for me,” he said. “Listen, you don’t have to look far for examples where that kind of care or that kind of supervision has, unfortunately, become requisite. I’m no spring chicken, so I have been working in a time that predates intimacy coordinators being around. But you know, having sort of listened and perhaps things that I might have witnessed myself, I can totally see where that is paramount and kind of bonkers that it is a new concept.”

Jack and his co-star established a bond before filming began that helped them during the movie’s more sensual moments. “I think it kind of begins at the very start, and it’s a process that you kind of have to develop as organically as possible. And that was benefitted greatly by the time that we spent in the run-up to shooting. Laure [de Clermont-Tonnerre] offered us that time together,” Jack explained. “We had an intimacy coordinator present at all times, just to kind of help steer us and get us on our way to eventually a position where I feel like we trust each other and appreciate each other’s creative input. That was a real thrill. I count myself quite lucky to have experienced this with Emma and also with Laure.”

Lady Chatterley’s Lover begins with Connie living a life of wealth and privilege being married to Sir Clifford Chatterley. When their marriage becomes strained due to Clifford’s injuries from the First World War, Connie turns to Oliver Mellors, the gamekeeper on the Chatterley family estate. Their secret trysts lead her to a sensual, sexual awakening. Soon, Connie has to face a life-altering decision: follow her heart or conform to society’s expectations.

The 32-year-old noted that Connie and Oliver are “really attracted to each other beyond their own sort of bounds and able to then explore what that is with each other, albeit with a bit of infidelity involved and probably a lot of disapproval, but I think what happens with them two being together is something very visceral, very natural. I think that’s what the D.H. Lawrence was getting at in the first place, so that was very important to kind of stay mindful of that, what our exploration was, and the emancipation that comes through that.”

Prior to taking on the role of Oliver, the actor had not read the 1928 novel. “All I was aware of was that D. H. Lawrence probably is the only literary legend to hail from the same part of the world that I come from. So there was that. And then I think, anecdotally, there is always a bit of a typical reaction when you bring up this material with people at home, especially because I think it’s fair to say in book terms it’s quite, and I hope I’m not doing an injustice in saying this, but it is quite pornographic. So it’s always met with a kind of response that is now a little bit tongue-in-cheek.”

He continued, “It was banned for a long, long time. When you speak to a lot of the older generation at home, my grandma included, she can remember a time when this book was literally passed around in secret, which is always quite an interesting concept, especially with the job I’m doing. In that kind of hushed corners of society, for me, it always provokes a little bit of extra interaction. But then I did read the book, fell in love with it, and that the book actually served as a real beacon throughout the whole process, and I think Laure would agree, and I know Emma would agree.”

The Skins alum enjoyed embracing Oliver’s “richness” as a character. “He’s decided to denounce a lot of what society is trying to feed him, and he’s got some very poignant, rich reasons for that,” Jack told HollywoodLife. “And that, to me, is the study and trying to understand that. Listen, obviously, myself and Oliver, we exist in very different times, but I think what’s amazing is what’s still relevant now to what was relevant when D.H. Lawrence was first putting pen to paper and telling this story. They were some really good inroads for me.”