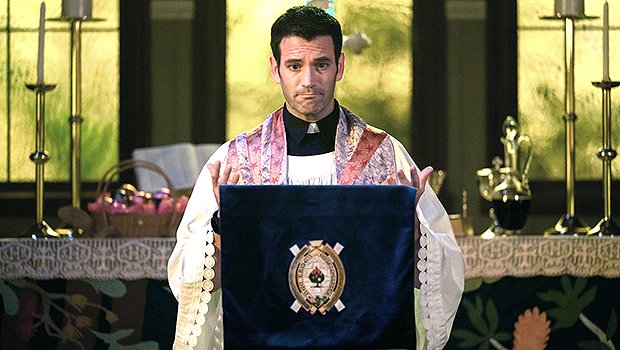 Colin Donnell goes from criminal mediator to reverend when he finds himself trapped in a small beach town in Australia. In his new Peacock series Irreverent, Colin’s character must moonlight as the devoted Reverend Mack while trying to find a way to make a swift exit before his past catches up to him. HollywoodLife spoke EXCLUSIVELY with Colin about diving deep into this meaty role.

From the first read, I just loved it. I loved the world that Paddy Macrae built. I loved that Mack/Paulo is such a complicated guy. I felt like it was an opportunity for me to do something different than people have seen me do on television before,” Colin said. “It’s such a funny show, and there’s so much humor. And then on the opposite side of that, you have so much heart, and you have such a wonderful story about community and personal growth that it felt like I was going to be able to use all the tools in my box to create a really complicated, multi-dimensional person for people to watch.”

Mack/Paulo will face “trouble” at every turn, Colin teased. “There’s the danger that is coming after him from Chicago. There is the danger of being found out not only by the police within the town but really by the community at large,” the actor told HollywoodLife. “He’s having to use all the tools that he had back in Chicago as a negotiator for the mafia to really fake everybody out and make them think that he is this reverend in a random church in the middle of nowhere.”

Colin noted that the “engine of our show” is Mack/Paulo “figuring things out on the fly whether it’s how to fake the reverend stuff, or whether it’s how to find some money to get the heck out of there. Along the way, he starts forming these unexpected relationships, like with Daisy and with Piper. That’s really the meat of where things start to change for him personally.”

Daisy, played by Tegan Stimson, will quickly become an “essential part of his reverend persona,” according to Colin. The actor added, “But also, we find out very quickly that she’s not exactly a goody-two-shoes, and they can help each other out in a lot of different ways. Not only is she helping him to play-act at what he’s trying to do for the town, but she has a little hand in his not-so-reverend-like behavior.”

The Peacock series was filmed on location in Australia, which Colin called an “amazing” experience. “I was able to take my wife and daughter over there with me. For the first two and a half months, we were in a very small town called Mission Beach in Far North Queensland, which was our Clump. And just like Max — a fish out of water in Clump — Patti [Murin], Cecily, and I were very much fishes out of water in Mission Beach.”

Colin continued, “But the town itself, which I mean, really plays its own character in the show, they were so welcoming so quickly, not only to me but to my family and the whole production that it just made for a wonderful sort of really fulfilling experience. I don’t think that we could have done half of the things we did without the support of the community there. It’s forever going to be a really special place for us.” Irreverent is now streaming on Peacock.