Harrison Ford on Reuniting with Helen Mirren for 1923 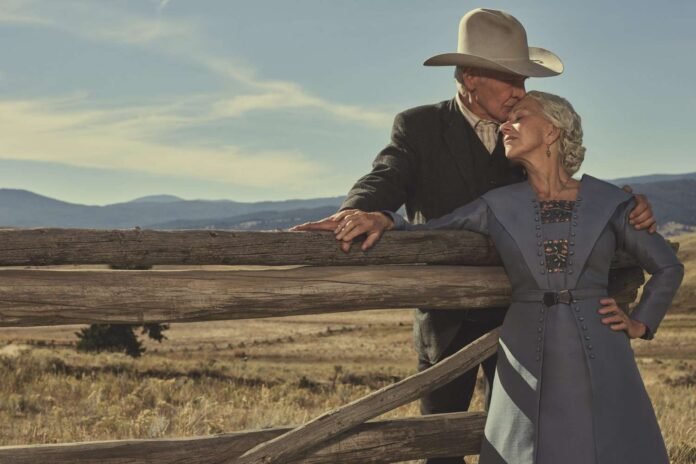 After first appearing on-screen together 36 years ago, Harrison Ford and Helen Mirren are back at it for the Yellowstone franchise’s latest offering, 1923.

The Yellowstone prequel series sees the actors reunite decades after Peter Weir’s 1986 film The Mosquito Coast. As Ford, 80, explained at the Hollywood Legion Theater Post 43 series premiere on Friday evening, his respect for Mirren, 77, hasn’t wavered since then.

“I admire her work and her person [now], and I have all the same degree of admiration for her as I did then,” Ford told multiple outlets, including PEOPLE. “She’s wonderful, she’s just a lovely person, and so it’s been both a professional pleasure and a personal pleasure working with her again.”

Back in 1986, Ford had already appeared in the original Star Wars trilogy and had knocked out two Indiana Jones films. Mirren, meanwhile, said she considered herself a “nobody” back then — as it was a time two decades before she’d win an Academy Award for her performance in The Queen.

Want to get the biggest stories from PEOPLE every weekday? Subscribe to our new podcast, PEOPLE Every Day, to get the essential celebrity, entertainment and human interest news stories Monday through Friday.

In 1923, the actors star as Jacob and Cara Dutton, a couple running a family farm in Montana while navigating the challenges of the early 20th century, including pandemics, a historic drought, the end of Prohibition and the Great Depression.

Ford told reporters Friday that the formation of the project is what ultimately got him hooked on the role. “The writing and the ambition of the piece that’s evident from the scope and scale of it, [drew me to the role,]” he explained. “And the precision of his language and dialogue, and the character.”

Mirren seconded Ford’s thoughts, specifically commending series creator Taylor Sheridan on his writing and calling his work “extraordinary.” Sheridan also manned the series 1883, which stars Tim McGraw and Faith Hill as James and Margaret Dutton, and follows their story as they travel to Montana.

“To be a part of something that is so exciting within the American sort of entertainment world, but also to be a part of something that is investigating American history in this particular way [is great],” Mirren said. “You can’t do it in two hours, you know, it’s great to have that great sprawl, and I just thought earlier on, it’s like a big Russian novel. It’s like War and Peace, you know, that real sense of an enormous arc of history. And to be a character within that, it’s very exciting.”

The latest series also features other names among the likes of Marley Shelton, Jennifer Ehle, Sebastian Roché and Darren Mann.

1923 premieres Dec. 18 on Paramount+ and the Paramount Network in a special simulcast event.