Guardians, assemble! The Guardians of the Galaxy Vol. 3 trailer was released by Marvel at CCXP23 in São Paolo on Dec. 1, and it features the first footage of the Guardians facing off against their new foe, Adam Warlock (Will Poulter).

Star-Lord (Chris Pratt), Drax (Dave Bautista), Groot (Vin Diesel), Rocket (Bradley Cooper), Nebula (Karen Gillan) and Matnis (Pom Klentieff) are all back as the Guardians. Plus, Zoe Saldana returns as Gamora, though this Gamora is a younger version who traveled to the present in Avengers: Endgame, after the original Gamora was killed by Thanos. Chukwudi Iwuji, Daniela Melchior, and Maria Baklahova join the film as new characters.

James Gunn is directing Guardians of the Galaxy Vol. 3, as he did with the first two films. He was actually fired by Disney after controversial tweets resurfaced on the internet, but the entire Guardians of the Galaxy cast issued a statement in support of James and eventually Disney reversed their decision. Filming began on November 8, 2021 and officially wrapped on May 6, 2022. 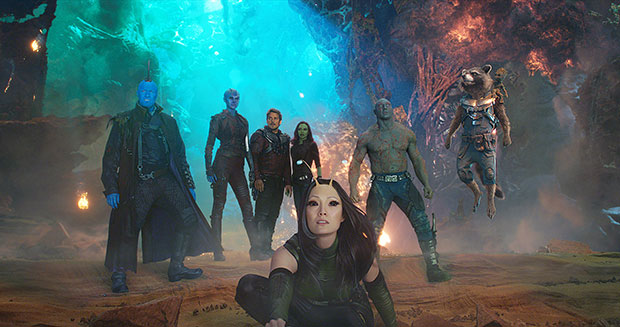 In a July 2021 interview with Entertainment Weekly, James described the script for the third film as being “pretty heavy actually.” He added, “It’s a heavier story, so it’s an emotional process to go through. Guardians of the Galaxy Vol. 3 will be released in theaters on May 5, 2023.

In a recent Twitter post, James also admitted how much the series has meant to him: “The majority of the last 10 years of my life have been spent working on & thinking about the Guardians. I still have a long road ahead of me with VFX & editing, but it was still momentous to me. It is somewhat simple to explain to others how much I love this cast & crew. It is more difficult to explain how much I love these characters — that I see them as parts of myself & parts of those I love, & filming them, & writing their words, is a way of expressing that love.”