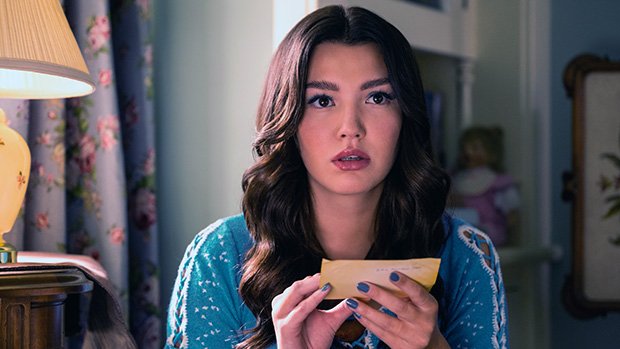 The story of Tully and Kate’s friendship continues in Firefly Lane season 2. The first 9 episodes of the second and final season were released December 2 on Netflix. In both the past and present, Tully and Kate experience ups and downs both as best friends and as individuals. In episode 7, young Tully finally gets the opportunity to confront her rapist in a poignant and powerful moment. HollywoodLife spoke EXCLUSIVELY with Ali Skovbye about this crucial moment for teen Tully.

“I think what’s so powerful about that scene is saying out loud what he did here, and in the specific words of ‘you raped me.’ I think saying that to that person, to your abuser, or whoever it is, is so empowering,” Ali said. “I think for a lot of time, she suppresses everything, but especially with this, she suppresses it and suppresses it and suppresses it. I think the work is never done, especially with issues surrounding PTSD. I think you always are struggling, and it’s a journey and a battle that you go through every day. But I do think that finally being able to say those words to him and hear it out loud for not only him but for herself, and to fully be able to come to terms with that is what happened to me and hearing it, is really empowering. I think there’s a lot probably that Tully, knowing Tully, would want to do, but I think hearing those words is enough to be able to propel her even more forward.”

She added, “I think hearing those words come out of your mouth is such a viscerally real experience for so many people… Everyone’s experience is different, but hearing yourself say it, accepting that that is what happened, is a really powerful thing, and something that I do think really helps in the process of re-self-discovery and then being able to come out on the other side of it.”

Pat shows up at Tully’s workplace with his new girlfriend. Tully tries to warn the young girl about Pat in the bathroom, but the girl says she doesn’t believe Tully. Later, Tully sees a tense fight between Pat and the girl, which ultimately leads to Tully addressing Pat to his face. Ali noted that Tully definitely would have still wanted to confront Pat even if he wasn’t there with another girl. “I don’t know if maybe she would have done it for sure, but I do think that having another girl there and having the possibility of that being repeated is the main reason why she did it,” she told HollywoodLife. “I mean, if you want to confront the person who did that to you, it’s kind of your own thing. But when someone else is involved, it no longer becomes just a you thing. It becomes, okay, I have a responsibility here now to make sure that this woman doesn’t have to go through what I went through.”

More than in the first season, teen Tully and Kate face major obstacles in their friendship during season 2. Tully struggles when she’s forced to move away from Kate and discovers Kate making new friends. “I think we saw at the beginning of the first season that she doesn’t really have anybody, and then she finds Kate and falls in love with Kate in a platonic best-friend sort of way and trusts her and relies on her, so when that is no longer there for her, I think it’s a really hard thing for her to deal with and go through and see her have other friends and see all these things happen,” Ali said.

The actress admitted that Tully is “a little bit too protective of Kate because Kate is all she has. Seeing her do things without her and having their friendship go through ups and downs as all friendships do is really, really hard for her to navigate and understand. I think that’s where her loneliness comes from because when things aren’t 100% with Kate, things aren’t 100% with Tully. I think we see that journey a lot more this season as the friendship is maybe a little rockier this season, but I think she makes it through. It’s a very big season for Tully with self-discovery.”

In their teen years, Tully and Sean’s relationship becomes a focal point during season 2. Tully and Sean’s closeness allows them to be honest with each other in ways they can’t be with Kate. As Sean tries to figure out his sexuality, Tully is there for him and supports him. In return, Sean helps Tully as she tries to move forward from her assault.

“Tully loves Kate so much, and anyone related to Kate, Tully loves so much — her parents, her brother, everything to do with Kate is Tully’s everything. She already loves Sean so much, and I think it’s really beautiful that both of them are struggling so much and come to this realization that they’re both not doing so great,” Ali explained. “They’re both struggling. They both love each other so much, and they can help each other go through some of the hardest times for both of them. I think it’s really beautiful to see them connect like that. I love their friendship. I think it’s true. I feel like everybody needs somebody like that, who’s just there to protect them and there to help them. It’s not necessarily this hot romance thing, it’s just this thing of like, okay, we’re both stuck. We both love each other. Maybe let’s see if we can help each other out.”

Tully’s complicated relationship with her mother, Cloud, continues to be a throughline for Tully in both the past and present timelines. Cloud is far from perfect, but there’s an unconditional love that Tully has for her mother. “I think a lot of people can relate to having a parent that the relationship is a bit toxic, but they’re your parent and you love them so much,” the actress said. “I think unconditional love with a parent is no matter how sh*tty they can be sometimes you will always love them. It’s like a sibling. You will always love them no matter how sh*tty they are to you and how many things they do.”

Tully and Cloud’s relationship is deepened even more by the fact that Tully has never known who her father is. Other than Kate, Ali noted that Cloud is the “only other extension” of Tully. “Tully will always remember the good moments just as much as the bad, so that’s why she will always love her and always go back because she remembers those moments because they do have true, tender, loving mother-daughter moments,” she added. “It isn’t just this one-sided, horrible relationship. They do share a lot with each other. I think we also put our parents on too high of a pedestal a lot of the time. She was young and sometimes you’re in a situation that you can’t handle. Even if you can’t see it, she is trying. And I think Tully does see that in the good moments, and that’s why she will always have unconditional love for her.”

Ali and the cast have already finished filming the final 10 episodes, which will drop in 2023. The end of production was a full circle moment for Ali and co-star Roan Curtis, who plays young Kate. “We were the very first scene of the show in season 1, and we were the very last scene of the show ever. It was a very full story and well-rounded moment of where we started and when we ended,” Ali said.