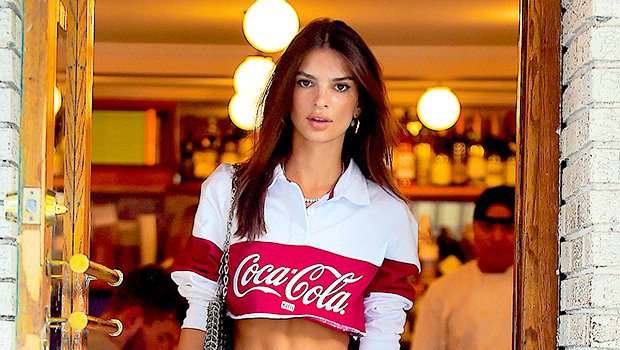 Emily Ratajkowski has some moves! The 31-year-old model and actress took to TikTok to perform the viral dance to the song, “Tubarão Te Amo”, in blue pants and a super cropped white t-shirt on Dec. 1. She seemed to not take herself too seriously as she did loose versions of the choreography while a brunette acquaintance lounged on a couch in the background paying no attention to Emily at all. Emily wore a straight face throughout the entire video but appeared to enjoy herself as she threw in some crumping at the end of the sexy clip.

Just in case i get to Brazil sometime soon 🇧🇷

The fun video came just weeks after Emily was reported to be dating Pete Davidson. She and the 29-year-old Saturday Night Live alum were first spotted in public on Nov. 16 while celebrating Pete’s birthday at his Brooklyn abode. Two weeks later, a source revealed to HollywoodLife EXCLUSIVELY that Pete has dubbed Emily the woman of his dreams.

“After spending Thanksgiving together and then going to the New York Knicks game together, it is more than obvious to anyone who knows Pete Davidson that he is completely into Emily Ratajkowski,” the insider explained. “As of right now, he is not seeing anyone else, and she told him that she is not either. They seem like the perfect match, and they are very attracted to each other.”

Emily and Pete are each other’s first publicly known romantic partner since their respective breakups this year. Emily filed for divorce from her ex, Sebastian Bear-McClard, in September after tying the knot in 2018 and welcoming a son, Sylvester Apollo Bear, in 2020. Meanwhile, Pete and Kim Kardashian, 42, broke up in August after nine months together.

According to a KarJenner source, Kim is quite fond of the idea of Pete and Emily together. “Kim has known Emily for some time and she approves of them dating each other,” the source divulged to HL EXCLUSIVELY. “She thinks it is cute and she is legit happy that he found someone that is more his speed and on the same wavelength as him.”

The hot TikTok also came just days after Emily opened up about her recent weight loss she said was caused by trauma. “I was down to 100 pounds recently and it was really, really scary,” she explained on the Nov. 29 episode of the High Low podcast. Luckily, she is in a better mental state and has put some weight back on. “For me, it’s a huge game-changer and how I know I’m happy,” she added.