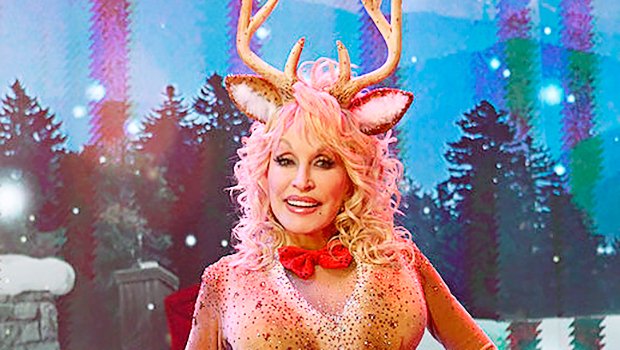 Dolly Parton knows how to celebrate the holidays! The 76-year-old is embracing “mountain magic” in her network TV special, Dolly Parton’s Mountain Magic Christmas, which airs December 1 on NBC. Dolly rocks a variety of outfits in her modern-day movie musical, including a bejeweled reindeer costume.

To channel her inner Rudolph, Dolly dons a light brown bodysuit with jeweled detailing. She also wears a red belt with bells on it. To top off her reindeer look, the singer wears a headpiece that includes reindeer hooves. When Dolly goes out, she goes all out.

Dolly Parton’s Mountain Magic Christmas is the “frenetic backstage story and delightful on-camera results of Dolly’s desire to uplift an exhausted world’s spirits by sharing the unique ‘mountain magic’ she has always found in and around Dollywood at Christmas.” There will be production numbers and rehearsal as Dolly finds herself taking a private journey into her past, guided by the mysterious appearances of her personal Three Wise Men.

NBC’s synopsis reveals that “when it’s time for her big special to air live, a renewed and inspired Dolly goes rogue and shows the world that the real magic of Christmas lies in the hearts of the children we all once were, the realization that Christmas is about the people we share it with, and how her faith remains the common thread between Christmases past, present, and future.”

The special will feature two of Dolly’s most legendary songs — “9 to 5” and “I Will Always Love You” — as well as a new holiday melody. Let the holiday celebrations Dolly-style begin!