‘Do you hear it, Moscow?’: Russian troops face public resistance in cities seized 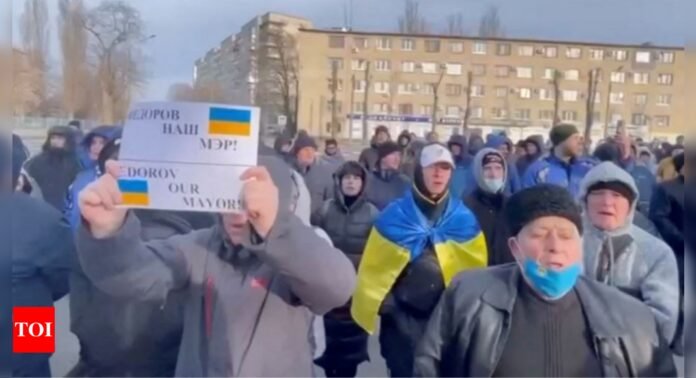 One day after the mayor of Melitopol in southern Ukraine had a hood thrown over his head and was dragged from a government office building by Russian forces, according to Ukrainian officials, hundreds of people poured out into the streets on Saturday in an expression of outrage and defiance.
“Return the mayor!” they shouted, witnesses said and videos showed. “Free the mayor!” But nearly as soon as people gathered, the Russians moved to shut them down, arresting a woman who they said had organised the demonstration, according to two witnesses and the woman’s Facebook account.
The episode is part of what Ukrainian officials say is a pattern of intimidation and repression that is growing more brutal. It also illustrates a problem that Russia is likely to face even if it manages to pummel cities and towns into submission: In at least some of the few cities and towns that Russia has managed to seize – mostly in south and east – they are facing unrest and revolt.
President Volodymyr Zelensky sought to tap into public rage.”The whole country saw that Melitopol did not surrender to the invaders,” he said. “Just as Kherson, Berdyansk and other cities where Russian troops managed to enter didn’t – temporarily managed to enter. And this will not be changed by putting pressure on mayors or kidnapping mayors.”
After people took to the streets, he praised their courage. “Do you hear it, Moscow?” he asked. “If 2,000 people are protesting against the occupation in Melitopol, how many people should be in Moscow against the war?”
According to the Ukrainian president and parliament, mayor Ivan Fedorov was abducted on Friday by Russian soldiers occupying Melitopol because he “refused to cooperate with the enemy”. The Ukraine government called the detention a kidnapping and a war crime”.