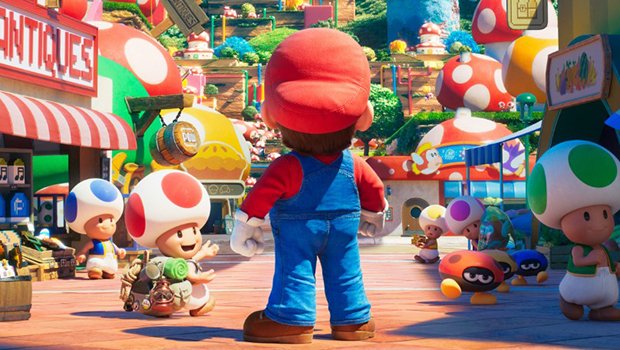 Start gearing up your (animated) engines, because another film based on Nintendo’s Super Mario video game franchise is coming out soon. The movie, which is officially titled The Super Mario Bros. Movie, is an animated project with a voice cast made up of some of Hollywood’s biggest stars. Plans for the next Mario film started way back in 2016, but production didn’t officially kick off until 2020. This is the third feature film adaption of the video game franchise. The first was the 1986 anime film, Super Mario Bros: The Great Mission to Rescue Princess Peach! That was followed by the 1993 live-action film Super Mario Bros., which starred Bob Hoskins, John Leguizamo, Dennis Hopper, and Samantha Mathis.

Fans are so excited to see their favorite characters from the Super Mario franchise pop up on the big screen again. Nintendo released the first teaser poster for the film on October 4, and the full-length trailer, which you can watch above, on Nov. 29. From the talented actors lending their voices for the film, to the current release date, here’s what we know about the Super Mario movie.

The Super Mario film will be released in theaters on April 7, 2023 in the United States. The movie was previously scheduled to come out December 21, 2022, but it was delayed by a few months. It will be available to stream on Peacock 45 days after its theatrical release. The movie will also be released in Japan on April 28, 2023.

The entire cast was officially announced Nintendo director Shigeru Miyamoto at the Nintendo Direct presentation on September 23, 2021. The lead role of Mario is going to Chris Pratt. Chris is best known for starring in the Jurassic World and The Guardians of the Galaxy franchises. Mario is a short Italian plumber who is in love with Princess Peach. Illumination producer Chris Meledandri has said that Chris Pratt won’t be using a thick Italian accent for the voice role. After Chris Pratt’s casting was announced, the internet was flooded with memes and jokes as many people were confused about the decision. But we’re betting he pulls off a great Mario impression.

Anya Taylor-Joy is voicing the gorgeous Princess Peach. Anya is best known for her lead role in Netflix’s Emmy Award-winning series The Queen’s Gambit. Princess Peach is the ruler of Mushroom Kingdom and the typical damsel in distress who has to be rescued by Mario. Cue a Chris Pratt and Anya-Taylor Joy love story in the film!

Charlie Day is voicing Luigi. Charlie is best known for playing Charlie Kelly on the sitcom It’s Always Sunny in Philadelphia. Luis is Mario’s younger fraternal twin brother and sidekick. He always has Mario’s back, no matter what!

T.J. Holmes’ Wife: Everything To Know About The ‘GMA’ Star’s 2 Marriages

Jack Black is the perfect person to voice the monstrous Bowser. Jack is famous for School of Rock, Gulliver’s Travels, Bernie, and the Jumanji franchise, among other projects. Bowser is the arch-nemesis of Mario and regularly kidnaps Princess Peach to conquer Mushroom Kingdom.

Keegan-Michael Key is voicing Toad. Keegan-Michael is known for his Comedy Central sketch series Key & Peele. He has experience doing voice-over work in the Hotel Transylvania movies and Toy Story 4. Toad is a citizen of Mushroom Kingdom and is a close ally of Princess Peach’s.

Seth Rogen will be the voice behind the infamous Donkey Kong. Seth has had a huge career and co-wrote popular films like Superbad and Pineapple Express. Donkey Kong is so popular in the Super Mario franchise.

Fred Armisen is voicing Cranky Kong. Fred has acted in tons of comedy films like Melvin Goes to Dinner and The Dictator. Cranky Kong is a grumpy elderly gorilla and grandfather of Donkey Kong.

Kevin Michael Richardson is the voice behind Kamek. Kevin Michael has voiced characters in Family Guy, American Dad!, and The Simpsons. Kamek is Brower’s childhood caretaker. He has magical powers including teleportation and changing the size of other creatures, as well as the ability to shoot magical blasts.

Sebastian Maniscalco is voicing Foreman Spike. Sebastian is a famous comedian who has released several widely-successful comedy specials. Foreman Spike is a construction foreman and rival to Mario. The character was in the 1984 video game Wrecking Crew with Mario and Luigi.

Charles Martinet, 66, also has a voice role in the upcoming film. Charles has been the voice of both Mario and Luigi in the video game series since 1992. He’s also voiced other characters such as Wario and Waluigi in nearly every single video game version of the Super Mario franchise. In the most recent game that’s come out, 2022’s Mario Strikers: Battle League, Charles voices Mario, Luigi, Wario, and Waluigi.

Teen Titans Go! developers Aaron Horvath and Michael Jelenic are directing the Super Mario movie. Matthew Fogel is the screenwriter while Chris Meledandri and Shigeru Miyamoto are the producers. The film is being produced by Illumination (who handles the animation) and Nintendo, while Universal Pictures is the distributor.

During a Q&A at Nintendo’s Feb. 20220 investor’s meeting, Shigeru Miyamoto explained that the virtual console inspired him to create the film. “Basically, it’s not that I want to make a Mario movie’, but that I began to consider that we should bring more Nintendo content into the field of video-making. With films, the amount of people who would contact our IP would widen, and increase the amount of people engaging with our IP. Then, we’d be able to further increase the spread of our media via video,” he said in the interview.

Nintendo and Illumination began discussions about creating the film in 2016. After four years of negotiations, Nintendo president Shuntaro Furukawa confirmed that the movie was happening with an expected 2022 release date. The full cast has already done their voice work for the film. Charlie Day, who is voicing Luigi, told Screen Rant in Feb. 2022 that the job was super secretive. “I know so little about the movie because it’s like the Marvel Universe. They released to me very specific lines, and they call me in and say, “Say Mario 7000 different ways and then we’ll pick which one we want,’ ” Charlie said. “So I know almost nothing. I’m not in the inner circle of the Nintendo World.”

No plot details have been released about the Super Mario movie, but as you can see in the trailer above, it’ll obviously feature a duel between Mario and Bowser. Nintendo released the first teaser poster for the film on October 4. The poster features Mario standing in his signature outfit staring up at Princess Peach’s castle from the streets of Mushroom Kingdom. Mario is surrounded by a group of Toads. Nintendo also dropped the first teaser trailer at New York Comic Con on October 6.

If past Mario projects are any indication, then this new film will probably feature Mario rescuing Princess Peach from Bowser with help from Luigi and his allies. The romantic relationship between Mario and Peach will definitely be an important aspect of the film, as well. We can’t wait for this movie to arrive!