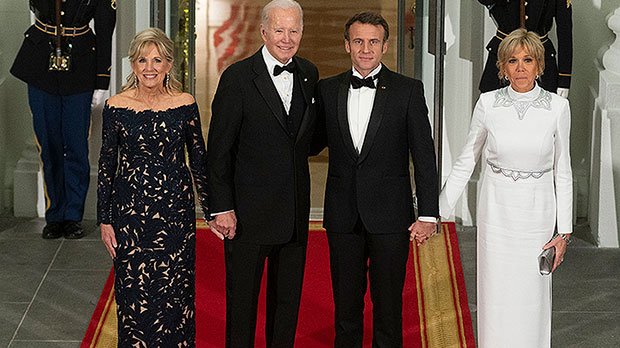 President Joe Biden, 80, hosted the first state dinner of his presidency on Dec. 1, and former French educator Brigitte Macron, 69, stunned in a long-sleeve white dress that featured silver embellishments around the neck and waist. The 69-year-old opted to wear her blonde tresses in an elegant updo, and accessorized with diamond earrings. She also carried a silver clutch and rocked her wedding ring and a silver watch for her other jewelry pieces. First Lady Jill Biden, 71, also shined in a black long-sleeve gown that featured geometric cutouts. Their husbands, on the other hand, opted for classic black tuxedos with pins on their lapels of their respective countries.

The president hosted Brigitte and her husband, French President Emmanuel Macron, 44, on Thursday evening in a lavish effort to repair the relationship between the U.S. and an important American ally. However, Emmanuel and his wife were not the only guests in attendance, as about 400 other prominent world leaders attended the state dinner, per PEOPLE. And, of course, Biden pulled out all the stops to ensure his guests would experience the absolute best the White House has to offer.

Some of the delicious food on the menu that evening included caviar, butter-poached lobster, Calotte of beef, and a watercress and sunchoke salad, according to CNN. The menu will also share the same dessert that was served at Donald Trump‘s first state dinner: crème fraiche ice cream. Notably, the decorations for the state dinner included the colors red, white, and blue, which are shared colors of the United States and France. Biden also spoke about his country’s shared ideal with France during a preview of the details of the event. “Our common values: liberty and democracy, equality and fellowship,” the 80-year-old noted.

Prior to the state dinner, the president and Dr. Jill Biden shared a dinner with Emmanuel and Brigitte in Washington DC on Nov. 30. Their adorable double date took place at Fiola Mare in Georgetown, where the two ladies were spotted smiling from ear-to-ear, as their husbands discussed diplomatic matters. For the outing, the first lady rocked a navy blue winter coat over her blue long-sleeve dress. And Brigitte, for her part, opted for a grey jacket over her white dress for the night on the town. Both of their husbands wore classic suits, Biden looked handsome in a navy blue number, while the French president opted for a charcoal grey suit.

Biden even took to Twitter on Wednesday night to share a sweet snapshot of the outing. “Welcoming some friends to town,” the U.S. leader penned. And just hours before the state dinner, the Promise Me, Dad author tweeted a video highlighting France’s allyship with the U.S. “France was our first ally. The first country to fly the American flag after our Revolution. The first to host our diplomatic post. But more than anything — France was our first friend,” Biden wrote.

During the clip, the U.S. president was seen shaking hands with Emmanuel, and talked about some of the conversations they’ve had. “France and the United States have always stood together,” Biden began. “I can say that President Macron and I have stood together since we worked together in the G7 meetings, and the G20. France is an incredibly, incredibly valued ally.” The video concluded with the father-of-four saying that he and Macron will work together to “strengthen the security and prosperity across the Atlantic.”