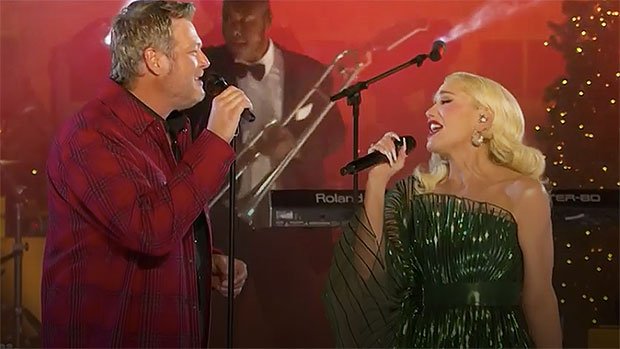 Blake Shelton and Gwen Stefani brought their love to the 2022 Christmas in Rockefeller Center event on Nov. 30. The couple, who married in July 2021, performed their Christmas duet, “You Make It Feel Like Christmas,” at the annual tree lighting event. They looked so in love as they serenaded one another in Rockefeller Center for the holiday special. Gwen was stunning in a strapless green dress for the performance.

The song was the pair’s second collaboration, released back in 2017, but it’s been a staple during the holiday season in the years’ since, as well. Gwen took the stage three times during Christmas in Rockefeller Center, as she also did solo performances of other holiday hits. Considering Gwen released an entire Christmas album back in 2017, she’s no stranger to making the rounds during pre-Christmas events each year.

The 2022 Christmas in Rockefeller Center also featured performances from stars like Dan + Shay, Andrea Bocelli, Brett Eldredge, Alicia Keys and more. There was also a special appearance from Amy Poehler and Maya Rudolph, as well as the Radio City Rockettes. TODAY Show stars Savannah Guthrie, Hoda Kotb and Craig Melvin hosted the event. In addition to the performances, the giant Christmas tree in Rockefeller Center was lit up for the first time this holiday season with more than 50,000 LED lights.

This is Blake and Gwen’s eighth Christmas as a couple. They got together on the set of The Voice in 2015 after their respective divorces earlier that year. Blake proposed five years into their relationship in October 2020, and they were married in an intimate wedding less than nine months later.

Blake and Gwen are both currently coaches on season 22 of The Voice. It will be Blake’s last season as a coach after sitting in his red chair since the show’s inaugural episode. Gwen has appeared as a coach on and off over the years, with season 22 being her sixth time. Blake has won the show a total of eight times, while Gwen won once.