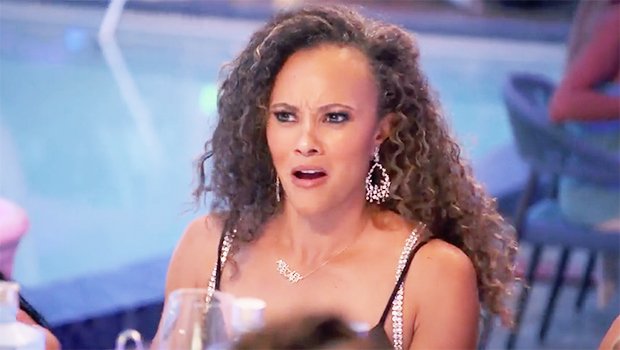 There’s still a lot of tension between the ladies of The Real Housewives of Potomac. That’s proven in this EXCLUSIVE preview of the Dec. 4 episodes of the series, when Ashley Darby secretly invites Wendy Osefo to the group dinner in Miami and Mia Thornton, who we recently interviewed on the Pay Attention Puh-Lease! podcast, bugs out.

Viewers of the show know that Mia’s not a fan of Wendy, following their physical altercation that was instigated by an argument about Cynthia Bailey’s ex-husband Peter Thomas. Mia had mentioned that Peter has beef with Wendy, Wendy got mad, a martini was thrown, and Mia seemingly hit Wendy with her clutch, but we can’t 100% confirm that. Either way, the cast is now divided, following that spat, and Mia’s not happy that Ashley’s being favorable towards Wendy.

As you can see in the clip above, Gizelle Bryant, Robyn Dixon, Karen Huger, Candiace Dillard Bassett, Charrisse Jackson-Jordan, Mia Thornton, and friend Jacqueline Blake are sitting down for another dinner in Miami, but Ashley’s missing. And that’s because she’s outside of the restaurant calling Wendy. She tells Wendy that they’re all dining at Santorini, and “it’s close” to her, so she should join them. Wendy says that “sounds good”, so she’ll get ready and head down. But when Ashley returns to the table and shares this info, things take a left turn.

“Did you invite her?” Candiace asks. And when Ashley says, “She’s going to stop by,” Mia bugs out and calls the move “disrespectful”. Ashley is shocked and can’t believe what Mia is saying.

In her private confessional, Ashley says, “I don’t see why Wendy can’t be a part of the group. If ultimately this trip was mainly for Karen’s birthday, it would make sense that Karen’s friend Wendy is allowed to come to the dinner.”

Want more? Watch the whole video above, and then catch new episodes of The Real Housewives of Potomac on Sundays at 8pm only on Bravo.

Kyle Richards’ Kids: Everything to Know About Her 4 Daughters