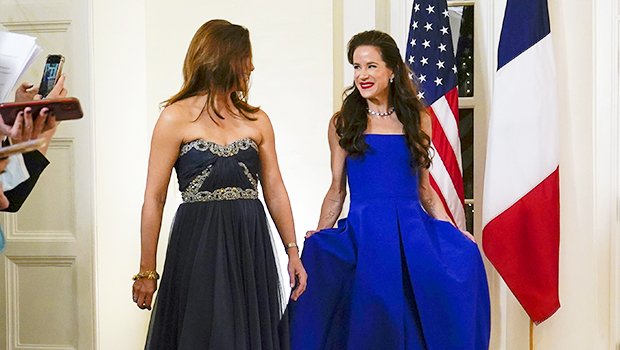 President Joe Biden’s daughter Ashley stunned as she arrived for the state dinner with France on Thursday, December 1. The first daughter, 41, rocked an eye-catching blue, strapless gown for the black tie event, which was held at the White House on the South Lawn. She looked ready to celebrate the momentous occasion, which marked a first for her dad, 80, and his presidency.

Ashley was seen speaking to her friend Elysia Beven in front of a doorway, with both American and French flags on its sides. Ashley’s blue dress may have been a nod to her father’s political party, or a reference to the shared color for both the United States and France, which represents vigilance and perseverance for the United States. Ashley also accessorized with a pearl necklace. Her pal sported a more grayish-blue dress with a silver design on it.

Ashley’s mom, First Lady Jill Biden, and dad hosted the evening at the White House, where they welcomed so many stars and officials, alongside French President Emmanuel Macron and First Lady Brigitte Macron.  Ashley’s brother Hunter Biden was also in attendance for the special day. Joe Biden posted a video of himself with the French president and wrote about the two countries’ longstanding relationship. “Friends in times of triumph and of trial, France and the United States will meet the future just as we always have: undaunted by any challenge that lies ahead,” he tweeted.

While Ashley’s parents are regularly in the public eye, she typically keeps her personal life private. She was a former social worker and owns the American-made clothing company Livelihood. Even though she mostly kept to herself, save for campaigning for her dad on some occasions,  Ashley did speak about being more open and public in an interview with CNN in November. “I finally feel like I’m in a place where I really know who I am, I know my worth, I know my family – who are honestly some of the most incredible, kind, compassionate humans, who have given up their life, really, for service to the American people,” she said.